Last year, a dear friend—and incredible YA author—Rebekah Crane, suggested I read, Many Lives, Many Masters by psychiatrist, Brian L. Weiss. The book details a young woman’s journey through hypnosis to rid herself of a long list of unexplained phobias. What is revealed during her sessions are details of lives lived over centuries, specifics only a well-versed historian would ever know. Furthermore, she is able to describe the death of each life, all of which correlate to a present phobia.

It was not suggested I read this because I love psychiatry or have a fascination with past lives. “The story,” Crane said, “is just captivating. The evidence for past lives is so strong, you can’t help but believe the possible.”

She was right. I couldn’t put it down. And in the end, I became a believer. It seemed impossible to not have lived other lives. Inevitably, Crane and I were discussing the possibility of writing a novel that centered around this premise. How fascinating would it be to have a protagonist who’s intimate with the details of lives lived centuries ago? 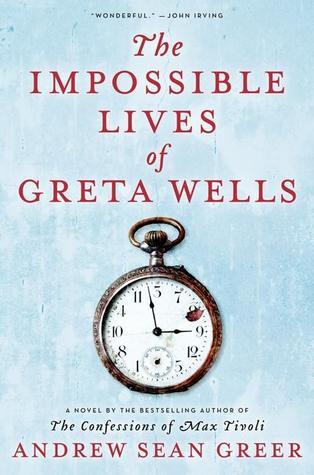 Last week, while perusing the shelves of my local library, I stumbled across the title, The Many Lives of Great Wells. Here, it seemed, was a novel that did just as Crane and I had contemplated. Taken the idea that one person lived several lives and put it into prose.

The story, written by Andrew Sean Greer, is about Greta Wells, a thirty-year-old woman who undergoes electroshock therapy to cope with the death of her twin and the break-up with her long-time lover. The year is 1985.

After her first session, she wakes in 1918. She is still Greta. She is still in her same apartment. And, she still has the same people in her life—her aunt, her lover, and to her surprise, her brother, who is alive in this year. When she undergoes a similar 1918-style procedure, she jumps to another year, 1941, where she must live as the mid-19th century Greta did. And so, she rotates with each procedure. From 1985, to 1918, to 1941, and back again. As she does, the other two Greta’s travel too, leaving no time without one.

What she discovers is how the actions of each Greta affect the lives of the others, how each life offers something the others lack, and how the time you’re born in may not be the time that’s right for you.

For me, the premise was mind blowing. However, it was the execution that had me turning pages late into the night when my eyes fought for sleep. Greer not only mastered the voice of a confused woman experiencing metamorphosis, but his prose often blurred into poetry. Too often, I’d have to stop and admire his ability to capture emotion so precisely and eloquently. More powerfully however, is his approach to transformation. He impeccably draws Greta’s changes out throughout the story, from page one to the very last, that it seems effortless. Her progress is entirely natural and real, that as a reader, you are right there with her, telling her whether she should stay in one time or travel to the next.