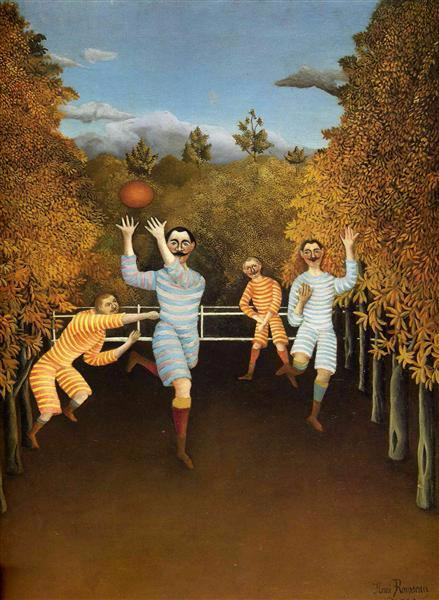 Thank you Twister Sister Literary Magazine for publishing The Field. This is my first attempt at Science Fiction and was inspired by Henri Rousseau’s The Football Players, now part of the Guggenheim’s permanent collection. This piece is dark, but for those who’ve read Wrapped in Color and Light, you already know I like to lean in that direction.

I was pulled outta my cell this morning and thrown into a shitty, white coaster. You know, those hover pods they stopped making, like, twenty years ago. Next thing I know, I’m dumped in this field covered in plastic, green shit that crunches under my feet. I think it’s supposed to be grass, though I doubt anyone’s felt that stuff in decades or what I’m standing on is anything close to the real thing.

The field is bordered by trees with long roots that crawl upon the ground and tiger-orange leaves that glow from the lights inside them. The stripes, however, are saved for me. Black on yellow like a god-damn bee, or whatever those fuckers were called.

I feel like I’m standing in an ancient football field, which I’ve seen somewhere before, though I can’t remember where. Fucking memory. Can barely remember shit anymore, which makes me bat-shit-crazy. When I can’t recall a face, a fact, or something that’s happened, I bang my head with my hand until it comes to me. These days, I can bang so much I black out and wake on the floor as confused as ever. The officers on the other side of the bars laugh because they still have their banks—a small chip that enhances our memories — but I don’t.